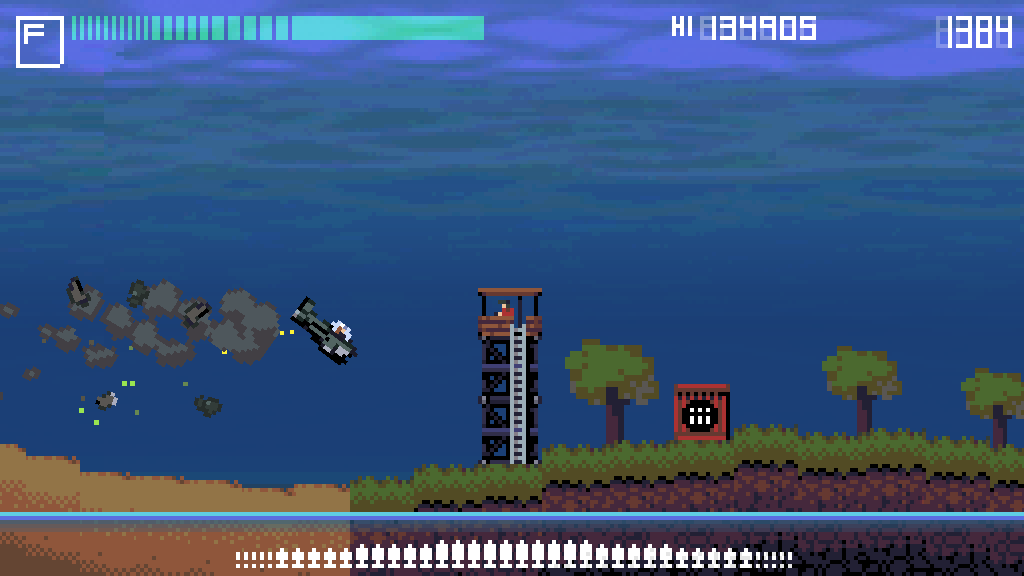 Sorry for the delay with this one, it’s been a heck of a couple of months.

Still, we’re getting things back on track now :). RnS update 5 comes with some notable fixes and improvements as suggested by the community, along with a few extra bonuses for good luck. I’m guessing the rebalancing of some of the more unfair aspects is going to lead to some truly terrifying new high scores, so get out there and get strafin’.

I didn’t have time to implement everything I’d have liked this time around (caves were a big one I couldn’t quite fit in, along with two other terrain types), but I figured you folks would like the current fixes anyway to tide you over. As always, more content will be coming in the future.

– Added new powerup: shield. Protects you for a single hit.
– Added new weapon: cluster bombs. Because there weren’t quite enough explosions already.
– Added new terrain: beach
– Crates now spawn higher in cities, should be easier to get. Not too easy, but not impossible like before.
– Minor tweaks to spawning systems, most noticeable is that terrain changes match a lot better now.
– Lots of graphics/effects tweaks, boosts and fixes. Livelier explosions, clearer pickups, splashier water and so on.
– Final score now appears prominently on the results screen, as it should do.
– Removed all traces of ad code from all versions. In-game ads are now gone for good!
– More to come!

As always, RnS is available at the Google Play Store, itch.io, Game Jolt and the OUYA Discover store, all of which should be seeing the update soon. Those of you out there on other platforms, keep a look out for further ports in the very near future (minor update: RnS is now also available from the Amazon App Store).

@dominictarason @richardcobbett @WordMercenary technically yeah, but feels like it's been losing that definition for a while now. - 3 days ago

@Blerkotron @YourSinclairRRY agreed, some kind of wiki or other user-editable archive would be a great way to go - 3 days ago