Time for a major update, featuring cross-platform online score tables, a second plane and a new micro-mission system. RNS now includes all the additions from updates 3 & 4 listed below: 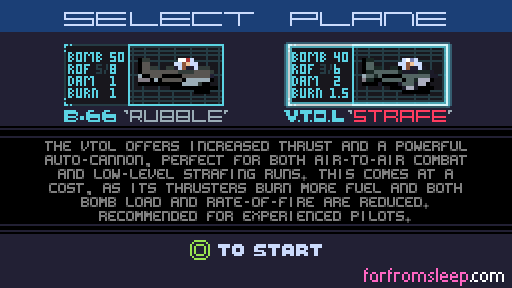 – Added a second plane, the VTOL.
– Added local highscore saving.
– Added dynamic missions where you destroy targets for bonus scores.
– Added a final ranking at the end of a run.

RNS is now available at the Google Play Store, itch.io, Game Jolt and the OUYA Discover store, all of which should be seeing the update soon. Ouya fans waiting for it to pass cert can skip the queue and sideload it from here instead.

@dominictarason @richardcobbett @WordMercenary technically yeah, but feels like it's been losing that definition for a while now. - 2 days ago

@Blerkotron @YourSinclairRRY agreed, some kind of wiki or other user-editable archive would be a great way to go - 2 days ago